The Silent Killer of Civilization–the Pandemic of the Fatherless

Today, the world is slowly realizing–while yawning in indifference–to what is civilizations’ most costly pandemic ever: Escalating Fatherlessness.The ratio of single-mom-led households to those homes with 2 parents, approaches 50/50 in many States in the US (nationally we are the second highest in the world) and is now 70% (#1 in the world) in Kenya! Symptoms of this destructive social phenomenon, lies at the feet of a misguided, me-centered feminist movement, where some 60% of families were deprived of the father living at home. The resultant single moms have born the fallout of extreme fatigue, stress-related ilnesses, and the loss of standard of living for some, aling with a precipitous fall below the poverty line for many.  They and their children are the victims.

Thus far, Core 300 has seen the Holy Spirit awaken, heal, and empower 32,000 Kenyan men. Of those, about 28,000 were married–with an national average of 5 children. Our Wive’s Survey data shows that their “new” men have been transformed into loving, hardworking, husbands and fathers who have bonded with their kids for the first time. Their overall behavioral improvement score–before and after completing our Warrior course is 95.5% versus before our training. When God transforms the heart of 28,000 distant, angry, and violent men, he “turns their hearts towards their children–and turns the hearts of their children towards their Dads.” (Malachi 4:6)

Barack Nyongesa(r), his wife Mercy (l), and their 6 children have undergone a radical spiritual and economic transformation through Core 300

In a short 9 years, over 131,000 children have had their father-wound healed, and had their heart turned homeward with love for the first time. A spiritually awakened and transformed man is bringing his own redemptive transformation in Christ into his family and beyond. 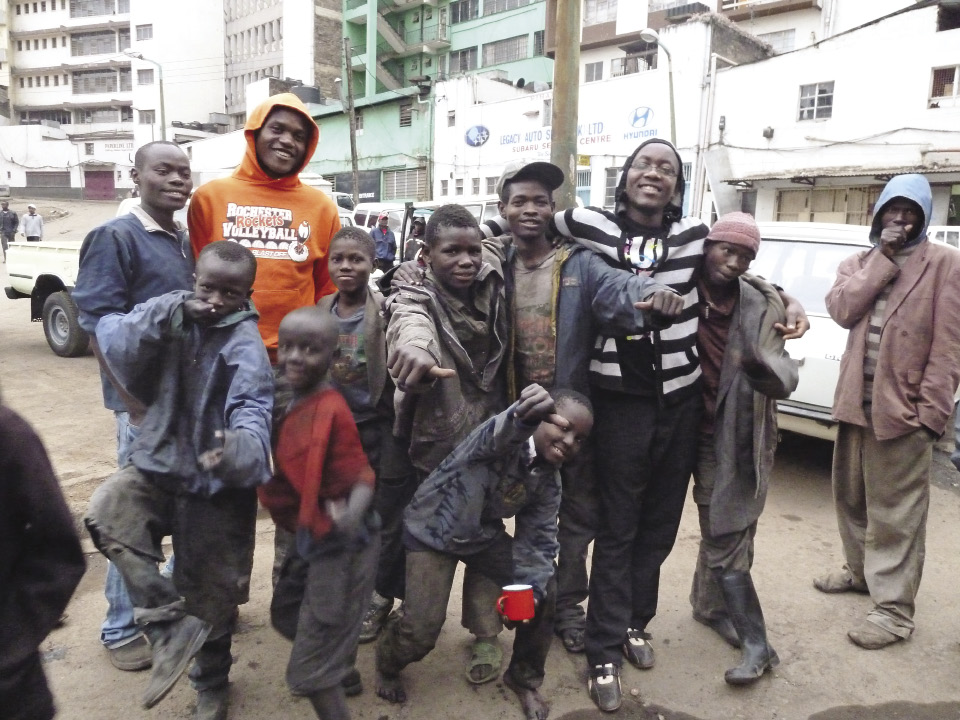 200,000 orphan street kids in Nairobi, Kenya of all ages follow the older fatherless teenage boys as their father figure, learning crime skills from pickpocketing to murder

Today billions of our children worldwide are raising themselves to adulthood without a 2-parent home.  Hundreds of 1000s in Kenya have neither parent and live under the laws of the streety. Rest assured its resultant debilitating internal psychological trauma–often called the father-wound by psychologists–is evident in the daily newspapers and murder and 5-fold (versus women) suicide statistics worldwide. Whereas a mass-murder-suicide once stunned our nation, the escalation of this unanswered violent crys for help and justice are greeted by a national shrug, with most not even being reported by the media.

The most unsettling yet unseen danger to civilization is the increase in single-mom households–where there is no stabilizing, protecting, providing, or present father in sight.

NGOs in Kenya — Inadvertently Doing Evil While Trying at Good

“For 18 years, our government [controlled by multimillion dollar NGO and US Grants] directed all aid away from males, 3 and older. We have failed the man and the boy child (teen). Our men are deeply broken–abandoning 70% of Kenyan families. Boys drop out of school by the 4th grade or sooner. After searching for help, I found that there was no NGO in Kenya with a proven method of rebuiulding men and boys like Core 300. It is the only organization we can go to with a proven solution.”

In the last 60 years, NGOs and western governments have providentially supposed they could fix fatherlessness in their own back yard–and has tried to do so in a variety of ways. Yet any results gained by spending 1 trillion+ of dollars (US) at urban-blighted cities, along with armies of well-meaning social workers at this social pandemic of fatherlessness, has been rewarded by dramatically worsening the situation. Yet Democratic party politicians who trust vote-getting, corrupt, inner city Cronies with the money, keep doing the same thing over and over.

In the US, the “investment”  of 750 million federal dollars under the Obama administration was mostly squandered when large sums were stolen by regional politicians, and corrupt innercity ministers, activists, and social workers.

In Kenya, just before stepping down from office, Obama’s State Department released a sum of 250 million USD grant to the recently formed Cabinet Office of Gender Affairs. This time, all of the money had to be directly spent on girls, girls teens, and women–at the exclusion of any human male over the age of 3!

ure-based and Spirit-inspired solutions to bring emotional and spiritual transformation into a man’s life through its 3-year Curricula has become the Divine prescription that heals the father-wound, and establishes a new and strengthened identity in a man’s soul: It all begins at the entry of the “Spirit of Adoption” by Father-God into a man’s heart.

Help become the answer to the cry of the 19,African child for a Daddy. Help us heal the Father-Wound and Give