I don’t know about you, but my heart is both grieved and broken for what has occurred in our communities and across the nation these last 12 days. Much–too much–has been said and written about it, so let me offer a real-life oasis of GOOD news from family far-away–to bring a fresh perspective. Some of you who prayed or gave to us have had a real-life stake. You’ll see how it comes back to you and me at the end of my story.

In the last 15 months, I’ve had the joy of going to Kenya 5 times. I go to listen first, then to understand. Then teaching and mentoring of leaders usually follows as well as forging and leveraging new alliances with government Including the US Embassy) and NGO partners without whom we would be dead in the water.

The Scriptures are clear: the FAMILY of God always comes first before issues of the World.

Our African Brothers and their families are family to me. But, what about you? Have been so distracted tending to worldly news reports–much of it fake news–around us that we have forgotten what family really is for Believers? I know I sure have. Yet, the Scriptures are clear: “the FAMILY of God always comes first.” Like a Jedi fighter Pilot, maybe we need to “STAY ON TARGET!”

if you pray the Lord’s Prayer as most do, the “Our Father” we appeal to–“Our Abba in Heaven is their Abba too. It also means we all had the same transfusion–the same covering of the blood of Jesus. It means we will know each other in Heaven. We are “blood” brothers and sisters with them too! 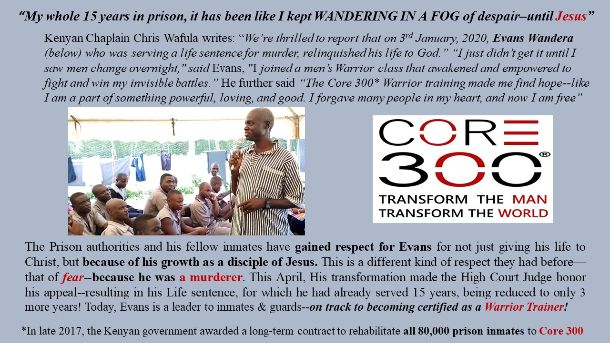 I am still shocked after 7 years—yet still thrilled–to watch how the Holy Spirit empowers our curricula in our pastor-teachers–originally written for a small group of SoCal churched men a decade ago–to bring about personal and familial transformation and its message in a way that repurposes the hearts and minds of Kenyan leaders!

Survey Proves Sustainable Transformation of Families
A 2019 anonymous survey of Ugandan and Kenyan wives of graduates of the Warrior course indicated an average 96% of their husbands were changed from:

– A man who was unnaturally “lazy,” into a man who is now industrious because of his devotion to God and his family–exhibited by increased income
– A man who felt household chores were beneath his gender, into a man who helps his wife with chores like carrying the daily water buckets for his family, and childcare
– A man who regularly beats his wife, into a man who not only stops his rages, but who now treats her kindly
– A man who was so bound in tribal thinking that he thought it a virtue to not learn his children’s names, into a doting Dad, playing and teaching his kids at home. In February of 2019, after 18 months of training Chaplains and logistic planning with the Kenyan Corrections Ministry, and as our Coordinator-Pastors trained over 12,000 pastors and Bishops in both the Warrior and the Priest programs, we finally launched Phase One (of Five) of our assigned Kenyan Prison Rehabilitation Program partnership with the Kenyan government. The changes in the lives of over 9,000 inmates and 2,500 prison workers and officers have already produced community and state-wide seismic, positive change in not only the lives of the inmates, but in the surrounding communities and prisons too.

The recent coming together of a flow of unity, wholeness, and hope have catalyzed a new thing–post-release soft landing for ExCons by reuniting families in our “Sanctuary Churches.” In the Covid-19 world, the rollout to complete Phase One continues today by our certified [and government salaried] Prison Chaplains. We have also seen an unexpected and hard to imagine the transformation of entire prison cultures–with attitudes of love and forgiveness replacing hatred and vendetta. This year we have begun to plan our first US Federal Prison Pilot to Terminal Island. more

Long ago–before the arrival of Portuguese Missionaries to Kongo in the late 14th century, ‘Tribalism” was the only way of life. Its morays directed the primitive but somewhat predictable day to day experiences of the individual and the tribal village. Today, this “ism” remains a fixed overarching ideology and values system that greatly overshadows and controls faith expressions of African Muslims and Christians both.

By the early 1800s, the Western colonialists had introduced its current penal system to de-incentivize lawless, illegal behavior. Before that, Tribal Chief would convey a court with his male Elders–and sometimes the tribal Shaman, to determine seemingly lenient–but in fact brutal–forms of punishment.

Overcrowding: This night and every night these men sleep on the floor head to toe-shoulder to shoulder

These tribal practices were similar to the practices and legal judgments prescribed by Old Testament nations in the Middle East–even by Kings of Israel. The most severe form of punishment was for murder. If guilty, the offender and his or her immediate family were excommunicated and proclaimed dead to all tribal members and banished into the wild. It was just a matter of time before they ran out of food–or water–were attacked and eaten by wild beasts, or captured and enslaved (or also eaten) by a nearby Tribe.

Today in most of East Africa, the depth of corruption is so hellish that between 40-50% of all arrests are made as a result of a guilty suspect paying the police officer $100 or less to arrest a random father eating dinner nearby with his family in the suspect’s place. Once in, many do not get charged–nor are they allowed a hearing or given a public defender–often for 5 or more years.

These 100 prisons have been given to us, by the mercy and love our God for the innocent. With your partnership, we can bring justice  to 65,000 men by continuing our fruitful rehabilitation process. In addition, the toxic squalor, terrible pay, and the constant sickness and death of inmates is a waking nightmare experienced by almost EVERY employee and guard we talk to and train. Few remain married–yielding to alcohol, gambling, and sickness.

I’m hoping you might want to join us in doing something good–really good for our brothers, their wives, and their children, far away. Send us a note to know about our “Adopt-a-Con”  (Warrior ex-convict) to cover them and their family for Covid-19 and malaria prevention, vitamins, school fees, and emergency expenses.

Some reports claim that for every five men who are incarcerated, only 3 will live to tell of it. All current prison facilities in Kenya were built under the colonial occupation of the UK. Mostly the life of an inmate–or the innocent man on the street,  is fraught with peril:

In the USA, we are in dire need of Justice and law enforcement reform as well, and it goes far beyond a Warden’s attitude, or poorly vetted guards or police officers. But it is a place to start.

Yet even as many broken-hearted US citizens are bewildered, grieve–or rag or protest. Meanwhile, other wicked opportunists display naked avarice and destruction of private property–is organized and fueled by Anarchists aimed at destroying all law and order. But let’s be reminded to remember that two-thirds of the world’s law enforcement systems are systemically and morally corrupted, and be thankful. This present evil goes beyond police forces but includes a need to reform an often more perverted court and penal system.

As Core 300 turns its God-given successes in reforming Kenyan prisons to the US this year, we’d appreciate your prayers and generosity that we might take the many 1000s of stories of men like Evans Wandera, and make them a reality across the developing world. You can be3come our Partner by Giving here.

So Others May Live,